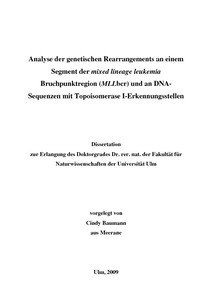 To investigate genetic rearrangements at a segment of the MLL (mixed lineage leukemia) breakpoint cluster region (bcr) a fluorescence based recombination test system was adapted by genetic engineering. Based on the detected recombination events through this test system together with results from breakage, cell cycle and apoptosis analyses conclusions could be drawn on the mechanisms underlying MLL-rearrangements. It turned out that the MLLbcr-fragment was highly fragile in comparison to control sequences even without chemotherapeutic treatment and independently of the chromosomal context. Chemotherapeutic treatment with different cytotoxic agents revealed that cell cycle-dependent, genotoxic and apoptotic effects had an impact on MLLbcr-specific and sequence-independent recombination. Treatment with aphidicolin resulted in an MLLbcr-specific increase of recombination traced back to apoptotic mechanisms in the extrachromosomal context. Furthermore in the extrachromosomal context etoposide and camptothecin were shown to activate an NF-kappa-mediated sequence-independent repair-stimulating mechanism. In the second part of the project the fluorescence-based recombination test sytem was used to analyse the interplay between the repair factors p53, topoisomerase I and poly(ADP-ribose) polymerase 1 (PARP-1) in recombination at DNA sequences with topoisomerase I-recognition sites. The data revealed p53-dependent enhancement of homologous recombination at a DNA-fragment comprising topoisomerase I-recognition sites in chromosomal context. This p53-dependent effect was counteracted by PARP-1. In addition, siRNA-mediated knockdown of topoisomerase I expression revealed the essential contribution of this enzyme in this regulatory mechanism. Further data indicated that PARP-1, probably through physical topoisomerase I interactions rather than through poly(ADP-ribosyl)ation, prevents p53 from stimulating spontaneous homologous recombination on chromosomes via topoisomerase I activity.