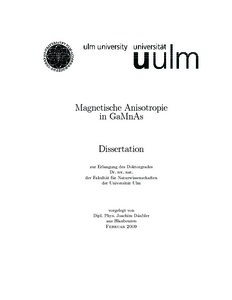 GaMnAs belongs to the group of dilute magnetic semiconductors (DMS). It shows a pronounced magnetic anisotropy (MA) and striking anisotropic magneto-resistance (AMR) effects. The magnetic properties of DMS can be controlled by doping, material composition and strain. Therefore, detailed knowledge of factors affecting the magnetic anisotropy in GaMnAs plays a key role for potential spintronic applications. The goal of this work was the detailed investigation of the impact of parameters like vertical strain, hole concentration, substrate orientation and patterning on the MA. A method is introduced enabling us to determine the MA from angle-dependent magnetotransport measurements. This method was used to analyze the impact of vertical strain on the MA in a series of GaMnAs grown on relaxed InGaAs-templates. In these layers a significant dependence of the MA on strain was found, resulting in a transition of the magnetic easy axis with increasing strain from in-plane to out-of-plane. The influence of substrate orientation on the magnetic properties of GaMnAs was studied in a series of GaMnAs layers on (001)- and (113)A-oriented GaAs substrates. In the (113)A-oriented layer an additional uniaxial contribution to the MA was observed. This contribution could be ascribed to a monoclinic distortion of the GaMnAs lattice for (113)A samples. The differences in the magnetic properties of (113)A- and (001)-GaMnAs have been used to realize quasi-planar GaMnAs structures consisting of laterally confined regions with different magnetic materials. Finally wires were prepared from 40 nm thick GaMnAs. Patterning of GaMnAs layers results in a change of shape anisotropy and in (partial) relaxation processes in the GaMnAs structures. We found the anisotropy contribution resulting from anisotropic relaxation to be dominant. This can be used for local engineering of the MA in GaMnAs, opening new possibilities for the design and realization of novel GaMnAs-based functional structures.