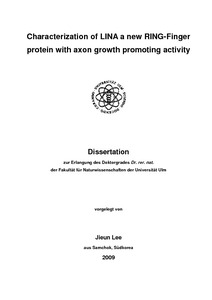 Axons in the adult CNS fail to regenerate after injury, while axons in the PNS can regrow and succeed in reinnervating their target. This difference results from the non-permissive growth environment in the CNS. Another major obstacle is the absence of or limited intrinsic capability for axonal regeneration in injured CNS neurons. Retinal ganglion cells (RGCs) as typical projection neurons, RGCs exhibit little or no spontaneous regeneration after injury. However, RGCs can survive an injury and reactivate their intrinsic axonal growth program 4 days after a lens injury (LI), which transforms RGCs to a robust regeneration state, which is associated with a dramatic change in gene expression. Among those genes specifically upregulated in the regenerative state, I focused on a gene encoding a so far uncharacterized, but identified protein, known as XXX (RING finger protein XXX) in mice. The sequence of this protein in the rat has not been identified yet and after cloning, the protein sequence of the rat showed 100 % identity to that of the mouse. In our lab we named this protein Lens Injury induced factor with Neurite outgrowth promoting Activity (LINA). The main focus of my work was to characterize this protein and its possible role for the neurite outgrowth. LINA consists of 155 amino acids containing a highly conserved motif consistent with a RING finger (C3H2C3 type) and a hydrophobic transmembrane domain. LINA forms a ternary complex and was expressed in the cortex, cerebellum, retina. LINA was partially co-localized with the trans-Golgi network. LINA overexpression increased neurite outgrowth 2.5 fold compared with controls in PC12 cells, differentiated by nerve growth factor (NGF). Understanding the molecular mechanisms underlying its axon growth promoting effects may open new strategies to improve recovery after CNS injuries.