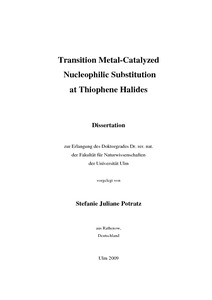 Task of this thesis was nucleophilic substitution at thiophene-halides with O- and N-nucleophiles using copper and palladium catalysts. It was shown that phenols could be coupled under mild reactions conditions using modern copper catalysts. However, reaction conditions were not universal and conversion of diols was not possible. The poisoning of the catalyst due to stable copper-dialcoholate complexes was discussed. For amination of thiophene halides palladium catalysis was most effective. Several reactions conditions according to Buchwald-Hartwig amination were tested. However, reaction conditions compared to literature procedures could not be improved and no N-analogous EDOT was observed. To obtain donor-acceptor-donor co-oligomers and co-polymers, wherein thiophene acts as donor and 1,2,3-triazole as acceptor, azido(oligo-)thiophenes and ethynylated (oligo-)thiophenes were reacted in a copper catalyzed Huisgen-cycloaddition. Due to the instability of 2-azidothiophenes, conjugated thiophene-1,2,3-triazoles had to be synthesized in a three-component one-pot procedure starting from thiophene-halide, sodium azide and terminal alkyne with copper catalyst. Investigation of optoelectronic properties led to the assumption, that the triazole ring rather interrupts the conjugation. Additionally, no intramolecular charge transfer (ICT) could be observed. However, azidomethyl-thiophenes were stable and could be coupled under standard "click"-reaction conditions to terminal alkynes or with TMS-protected alkynes under in situ deprotection conditions. The non-conjugated co-oligomers and co-polymers show properties of the thiophene subunits. With this method it is possible to combimne good properties of polymers (e.g., stability) with those of oligomers (e.g., optoelectronic properties). The application of such co-polymers as semiconductors in organic electronics is conceivable. Through the proper choice of monomers all properties of the resulting co-polymer can be adjusted.