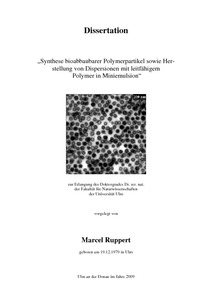 The present PhD thesis shows new advances in miniemulsion polymerization. We investigated dif-ferent polymerizations in miniemulsion, namely anionic and oxidative polymerizations, in order to in-crease the range of latexes synthesized in heterophase polymerization. We performed the synthesis of poly-(epsilon-caprolactone) via anionic polymerization in inverse miniemulsion to obtain polyester la-texes. The polyester exhibits a rather high molecular weight in the range of 35 000 g.mol-1 and the heterophase polymerization led to a spherical structure of the resulting particles. Polyester dispersions in water were prepared under sonication upon addition of polyester dispersion to water and subsequent evaporation of the organic solvent. This process is of advantage over the solvent dis-placement technique due to redispersion of particles instead of a polymer bulk. Furthermore a co-polymer existing of the monomers epsilon-Caprolactone and the industrial important epsilon-Caprolactam was synthesized via miniemulsion. The resulting copolymer comprising the properties of both homopoly-mers was obtained as nanosized particles with a molecular weight up to 25 000 g.mol-1. Similarly the well-known biodegradable polymer poly(L-lactide) was accessible as nanoparticles via emulsion and miniemulsion polymerization. The copolymer as well as the poly(L-lactide)particles were redispersed in water by a double miniemulsion process. Finally we investigated the oxidative polymerization of ethylenedioxythiophene to receive the conductive poly(ethylenedioxythiophene). In conclusion we were able to show that the miniemulsion is an appropriate technique for the receipt of conductive polymer particles which also could be doped during the heterophase polymerization. The progress was applied to encapsulate nanotubes dispersed in water with a conductive polymer.