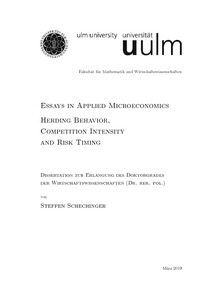 We investigate whether credit rating agencies systematically follow each other's rating decisions. Therefore, we rely on the rotation of rating analysts within credit rating agencies and their impact on the rating. Using this institutional setup, we disentangle causal herding behavior from simple co-movement between credit rating agencies due to changes in firm fundamentals. Rating analysts have substantial influence on ratings, and we use their individual optimism or pessimism as instrumental variables to estimate causal effects of a rating change induced by an analyst on other agencies' ratings. For our comprehensive sample of U.S. and European firms, rated between 1995 - 2016 by S\&P, Moody's and Fitch, we find significant herding behavior among credit rating agencies. The average herding behavior amounts to 0.4 notches for a one notch change at another credit rating agency, which is roughly half the size of the simple co-movement between credit rating agenciesThis study examines theoretically and empirically how different contest structures, i.e. whether contestants move simultaneously or sequentially, influence the competition intensity of heterogeneous contestants. In the course of this paper, competition intensity is a measure for the difference in contestants' outputs, where lower differences between contestants are accompanied by higher competition intensity. The main goal of this paper is to provide the first empirical comparison of competition intensity with data from the field. We use a unique dataset from the winter sports discipline biathlon which enables us to compare the same contestants in simultaneous and sequential contest formats. We show, that the theoretically derived result of a higher competition intensity in a simultaneous contest compared to a sequential contest holds in the field.We study risk taking and timing in a simple contest model with two heterogeneous agents. Agents can decide between a safe and risky action, in which we allow for different degrees of correlation between outcomes of the risky strategies. We study this model using different time structures, i.e. agents move simultaneously, sequentially or their move order is determined endogenously. We illustrate that the correlation has a crucial influence on not only agents' risk taking but also their risk timing.