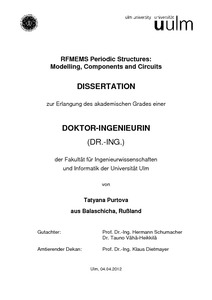 The first part of the thesis covers the design of diverse RFMEMS components to be used in unit cells of periodic structures. The developed components include two- and three-state shunt and series switchable capacitors as well as an RFMEMS-switchable inductor. The components were designed using the RFMEMS technology at Fraunhofer Institute for Silicon Technology (ISiT) in Germany and at Fondazione Bruno Kessler (FBK) in Italy. The second part of the thesis is devoted to the development of a broadband dispersion model of distributed MEMS transmission lines. The model extends the results derived in [4]. The emphasis is on right-handed structures including the commonly-used shunt capacitive loading as well as series inductive loading and combination of both shunt capacitive and series inductive loading. The latter can potentially overcome the inherent trade-off between impedance mismatch and phase shift. Simple, accurate and frequency-dependent equations for the propagation constant and equivalent characteristic impedance are obtained by adopting the "loading factor" concept used in [5]. Besides, accurate equations for cut-off frequencies of all pass- and stopbands are derived for the cases of shunt capacitive or series inductive loading. The third part of the thesis presents RF-MEMS phase shifters and impedance tuners based on the periodic structures utilizing the components developed in the first part. The part covers Ka-, V- and W-band phase shifters with capacitive and capacitive-inductive tuning. Operation frequency of phase shifters was extended from the recommended 30 % [6] to 70 % of the cut-off of the first passband. Besides, Ka- and W-band impedance tuners also with capacitive as well as capacitive-inductive tuning were developed. Good impedance coverage at V- and W-bands was obtained, making the circuits suitable for load-pull and noise parameter measurement systems.