Paving the way for structural modelling by smFRET measurements 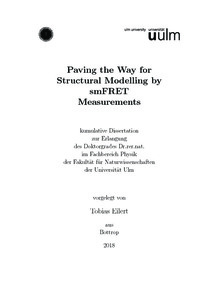 The thesis at hand contributes to the field of structure determination of bio-macromolecules. It focuses on the Förster resonance energy transfer (FRET), which allows to infer distances at the molecular level (≈ 2-10 nm) making FRET a promising tool for structure analysis. In the process of FRET, the energy of a photon, absorbed by a fluorophore, called donor, is transferred to a second dye, called acceptor. FRET experiments result in an average FRET efficiency which in the first place depends on the distance between donor and acceptor. If the two dyes are attached to specific sites of a macromolecule, we can infer intramolecular distances not only in vitro, but even in vivo. Furthermore, FRET can be observed on a single-molecule level in real time. Thus, different conformations and their dynamics of one macromolecule are observable and distinguishable by single-molecule FRET (smFRET) experiments. These features encouraged the development of the Nano-Positioning System (NPS). The basic idea of NPS is that we can localise an unknown position unambiguously, if we know its distances to at least four known positions. Given a network of dyes, NPS allows thus for the dependent localisation of unknown positions of fluorophores, such that the structure of macromolecular complexes can be illuminated by FRET measurements. As a Bayesian analysis tool, the theoretic basis of NPS is a probability distribution, the so-called posterior. It tells us how probable a spatial arrangement of dyes in the network is conditional on the experimental smFRET efficiencies measured between the dyes. Hence, the present thesis deals on the one hand with the development and implementation of a fast and adaptive sampling algorithm which extracts the structural information hidden within the posterior leading to the release of Fast-NPS. On the other hand, we promoted smFRET as a structure analysis method by providing a manual guide of how to perform smFRET measurements at a TIRF microscope and how to subsequently infer a structure in using the software Fast-NPS. This is not only presented in a manuscript, but also in a how-to video. A major difficulty in the inference of structures by smFRET measurements is the transformation of the smFRET efficiency to a distance. An important factor here is how the fluorophores are described. The publications of the cumulative thesis at hand report the progressing development of dye models from one single conservative model to a set of primitive models incorporating different assumptions. For the application of the latter, we developed a consistency test such that we can test, if the experimental smFRET efficiency is still in accordance with the applied dye models. This sophisticated procedure led to a 4-fold enhancement of localization precision on average. In a benchmark study, we applied these models to analyse smFRET data obtained from dsDNA and a protein-DNA complex at a TIRF microscope. We could show that Fast-NPS infers the correct position in both cases. However, we saw that some models are too strict in their assumptions, such that the inferred structures become inconsistent with the smFRET data. A further concern is that we could also find model combinations that do not infer the correct positions, but still are consistent with the experimental data. The latter problem guided us to a more sophisticated theory of dye models. We understood that the FRET efficiency is inseparably determined by the geometry and kinetics of both dyes. This leads to a complete description of the smFRET efficiencies by expectation values. For dyes whose motions can be treated approximately as time-independent, we can compute the expected value of the smFRET efficiency by Monte Carlo integration. Completing the theory, we also established a stochastic simulation in order to calculate the expected value in the case of time-dependent motions. We accomplished this by explicitly simulating the rotational and translational diffusion of donor and acceptor simultaneously to the donor de-excitation. It is important to note that these simulations are guided by experimental parameters obtained from fluorescence lifetime and time-resolved anisotropy measurements. In further utilizing the stochastic simulation, we developed a statistical method to classify the motions of donor and acceptor during a single de-excitation event into one of the so-called transfer regimes telling us how to average the motion. Applying this method, an investigation of dyes attached to dsDNA showed us that their kinetic assumptions, usually applied in structural inference, are not valid over the whole distance range inferred by FRET. This has a great impact on the future analysis of smFRET experiments.