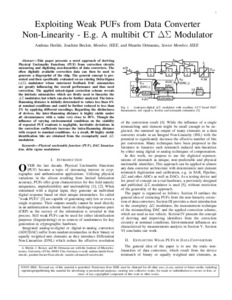 This paper presents a novel approach of deriving Physical Unclonable Functions (PUF) from correction circuits measuring and digitizing non-linearities of data converters. The often digitally available correction data can then be used to generate a fingerprint of the chip. The general concept is presented and then specifically evaluated on an existing Delta-Sigma (∆Σ) modulator whose outermost feedback DAC mismatches are greatly influencing the overall performance and thus need correction. The applied mixed-signal correction scheme reveals the intrinsic mismatches which are firstly used to linearize the ∆Σ modulator, but which can also be further analyzed. The intra-Hamming distance is initially determined to values less than 6% at nominal conditions and could be further reduced to less than 2% by applying different encodings. Regarding the distinctness of devices, the inter-Hamming distance is highly stable under all circumstances with a value very close to 50%. Though the influence of varying environmental conditions on the stability of repeated PUF readouts is negligible, inevitable deviations in the correction coefficients increase the intra-Hamming distance with respect to nominal conditions. As a result, 80 highly stable identification bits are obtained from the exemplarily used ∆Σ modulator.