Preparation and characterization of nanotube ferrofluids by template-directed methods 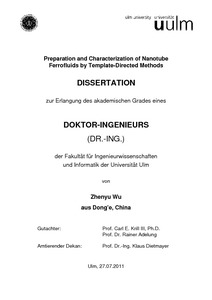 Experimental investigations suggest that replacing the spherical nanoparticles of a conventional ferrofluid with anisotropic magnetic nanotubes would lead to a stronger field-induced viscosity enhancement and a much-improved stability against shear thinning, thus resulting in potential technological exploitation of switchable magnetic-field-induced viscosity enhancement in applications. The development of positive and negative templating strategies for the synthesis of magnetic nanotubes out of a variety of materials is described. The positive template is Tobacco mosaic virus (TMV) - in natural form or genetically engineered to express specific surface chemistries and lengths - which we exploit as a template for the electroless deposition (ELD) of nanosized clusters of nickel and as a scaffold for magnetic particles in a conventional ferrofluid. Our negative templating strategy employs porous anodic aluminum oxide (AAO) as a substrate for the atomic layer deposition (ALD) of a conformal coating of iron oxide, offering precise control over the length and wall thickness of the resulting nanotubes. Using a reverse-micelle-based wet-chemical method, we attempted additional experiments designed to synthesize one-dimensional FePt nanorods and nanowires that manifest superparamagnetic behavior at room temperature.