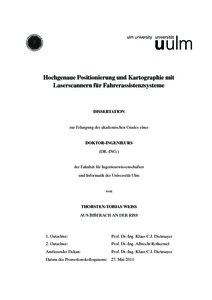 Driver assistance systems depend on an accurate environmental model containing the states of moving and stationary objects. The main goal of this work is to provide a detailed model of the stationary environment and the accurate pose of the observing vehicle in it. This is an important component for future driving assistance systems such as autonomous driving and intersection safety. The consistent movement estimation of the host vehicle based on serial sensors is a basic algorithm used by many applications. Quantitative analyses show the accuracy and the limitations of the approach. Online Maps provide detailed representations of the stationary environment based on laser scanner data and enable a robust separation of moving and stationary objects. The occupancy grid mapping approach was extended to get accurate results in real traffic environments. It considers for uncertainties of the sensor measurements and the movement estimation. SLAM (Simultaneous Localization And Mapping) algorithms are proposed, which are designed to improve the accuracy of the movement estimation in real traffic scenarios using laser scanners. gridSLAM compensates small errors in the movement estimation in common driving situations. The hybridSLAM approach is used to determine the movement of the vehicle in skidding and drift manoeuvres using both point style landmarks and expanded stationary objects with arbitrary outer contours, which can be found in most traffic scenarios. The approaches are switched by a robust skidding detection algorithm. Based on the Online Map a new approach for driving path detection is proposed, which detects lane boundaries and moving objects driving in front of the host vehicle. Stationary objects are extracted from grid maps with high position accuracy. Infrastructure elements and lane boundaries are detected automatically. Positioning algorithms allow for a highly accurate determination of the position and orientation relative to the maps.