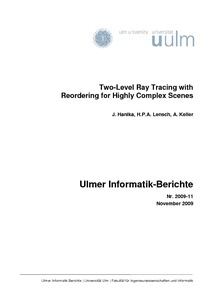 We introduce a ray tracing architecture which is able to handle highly complex geometry modeled by the classic production approach of surface patches tessellated to micro-polygons, where the number of micro-polygons can exceed the available memory. Two novel techniques allow us to carry out global illumination computations in such scenes and to trace the resulting incoherent sets of rays efficiently. For one, we introduce a technique for building the BVH over tessellated patches in time linear in the number of micro-polygons. Second, we present a two-stage ray tracing system which is highly parallel and minimizes the number of tessellation steps by reordering rays. The technique can accelerate rendering scenes of billions of micro-polygons and objects with complex reflection shaders using deferred shading.