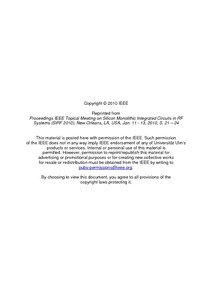 This paper presents a monolithic impulse generator IC targeting the spectral mask for ultra-wideband applications allocated in the European Union. The multicycle impulse is based on a spike triggered resonant circuit and has a peak to peak output amplitude of 32 mV and a time domain extension of 0.83 ns (full width at half maximum). It can generate single pulses as well as repetition rates exceeding the 200 MHz shown in this paper. The IC includes a conversion stage, which can generate the triggering spike from a low slew rate signal. The IC is fabricated in a Si/SiGe HBT production technology, has a power consumption of 58.6 mW at 200 MHz repetition rate and an on-chip area of 480 x 880 µm², both including the conversion stage. Based on the time domain measurement a model of the impulse transient for the use in system simulations is also presented. The model equation applies a summation of two Gaussian bell shapes as the envelope function, which is multiplied with a phase-corrected sinusoidal waveform to arrive at the final shape.