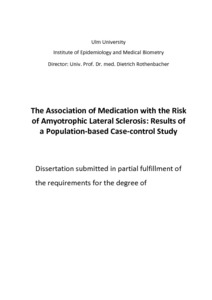 Amyotrophic lateral sclerosis (ALS) is the most common motor neuron disease. In ALS, there is a progressive destruction of the 1st and the 2nd motor neuron that on average leads to death within 2-5 years. The mean age at onset of ALS is 66.6 years in Southern Germany with a homogenous distribution across Europe and an average incidence of 2-3 per 100,000 persons. If the second motor neuron is primarily affected, patients suffer from lingual fibrillations, nocturnal spasms and atrophic paresis. A pronounced involvement of the cortical motor neurons increases muscle tonus. ALS can only be diagnosed by excluding other possible causes. Therefore, a wide range of diagnostic procedures is necessary. The etiology of ALS is still largely unknown. It has been shown that low education, low social class, body mass index, diabetes and smoking, and exposure to pesticides, lead, and mercury, may be associated with ALS risk. As to drugs, evidence is sparse. Statins, metformin, nonsteroidal anti-inflammatory drugs (NSAIDs), acetylsalicylic acid (ASS), antidepressants, thyroid hormones, angiotensin-converting enzyme (ACE) inhibitors and proton-pump inhibitors (PPIs) have been examined in the context of ALS with inconclusive results. Other drugs such as beta blockers and allopurinol have not been examined by epidemiological studies in the context of ALS to our knowledge. It was our aim to investigate the association between habitual medication (regular intake for more than 6 weeks) and ALS risk in order to generate hypotheses on potential pathomechanisms. Data about ALS patients for this dissertation has been collected 2010 to 2015 in the ALS registry Swabia which recruited patients from a population of 8.4 million people which helped establish prevalence and incidence of ALS in this population. About 81% of patients in the target population were included in the registry. Inclusion criteria for the case-control study that was implemented in the ALS registry were: diagnosis (according to El Escorial and International Classification of Diseases 10), residence in Swabia, age at diagnosis equal to or above 18, date of diagnosis, and ability to speak and write German. Matching criteria were: sex, age and region. The dataset this dissertation is based on comprises data of 330 patients and 660 matches (1:2 matched) retrospectively according to a comprehensive questionnaire that enquired about sociodemographic information such as marital status, children, profession as well as weight, height, smoking, alcohol consumption, education, habitual diet, psychological condition, familial causes of death, comorbidities, medication and intake of vitamin and micronutrient supplements. The outcome has been defined according to the revised El Escorial criteria. 64.4% of male cases and 68.4% of female cases had a clinically sure, probable or lab-supported ALS diagnosis. Less than one third of patients had a less certain diagnostic category according to El Escorial. We formed groups of drugs based on seven free-text fields, described and analyzed the data with the program SAS in an explorative approach. After calculating raw models, we adjusted for the possible confounders education, familial ALS, smoking, regular alcohol consumption and BMI in a multivariate analysis. If ORs are significant in the adjusted models or after sensitivity analysis, we state that the examined drug is associated with ALS according to our data. In the present study, there was no association between ALS risk and either ASS, NSAIDs, ACE inhibitors, beta blockers, glucocorticoids, thyroxine, allopurinol, insulin and multivitamin pills with or without minerals, but we found a positive association between PPIs, antidepressants and ALS risk as well as an inverse association of statin and metformin intake with ALS. The association of PPIs with ALS has been called into question by a sensitivity analysis and a calculation adjusted for duration of intake, which diminished the association. Both the sensitivity analysis and the calculation adjusted for duration of intake could reproduce the tendencies for metformin, statins and antidepressants. The association between antidepressants and ALS would be in line with literature, but needs further evaluation, since sensitivity analysis showed a strongly decreased association compared to covariate models. Conclusively, our results concerning statins and metformin give rise to the hypothesis that metabolic factors are involved in the onset of ALS.