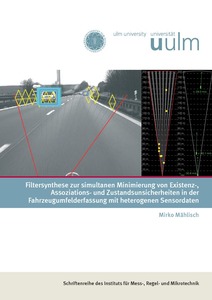 This work analyzes the classical system architecture for environment perception consisting of separate modules for the uncertainty domains of detection, data association, and state estimation with respect to early decision making and the usage of thresholds and heuristics. Within this common processing chain error sources are identified. The reason behind these errors is the inability of the state space model underlying recursive Bayesian state estimation to inherently represent all three existing uncertainty domains. For the first time in an automotive context, a knowledge representation based on Mahler’s Random Finite Set Statistics theory is used successfully. This approach allows the simultaneous representation of all three uncertainty domains in a single knowledge base. For the chosen parametric model, the Multi-Object Multi-Bernoulli distribution on random sets, automotive transition and measurement models get developed. It is shown that under certain assumptions, the resulting FISST filtering equations correspond to the Joint Integrated Probabilistic Data Association Filter. The presented filter handles all uncertainty domains within a holistic algorithm and replaces the classical modularized system architecture. Particularly, the algorithm is free of early decisions, thresholds and heuristics for the price of an increased modelling effort. Besides the elimination of error sources, there is also the benefit of a less expensive optimization procedure due to the reduced number of system parameters. A prototype perception system is demonstrated with a video and a Lidar sensor. The test car implementation tracks other cars up to distances of 200 meters regardless of whether they are moving or standing. A superior perception performance of the JIPDAF outputs compared to the raw detections is revealed with ROC charts. The work also analyzes the transmission behaviour of the JIPDAF.