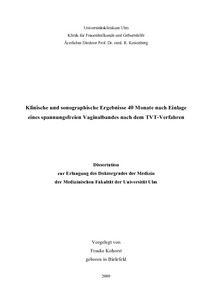 Objective: The aim of this prospective observational study was to evaluate the middle-term and long-term outcome after treatment with tension-free vaginal tape procedure (TVT). In addition, factors which influence the long-term outcome were identified. Material and Methods: Between 1998 and 2001, 157 patients were treated by TVT procedure at our institution. 21 patients had recurrent incontinence and 23 had undergone combined surgeries. Follow-up examinations were carried out in 148 patients at 3 months (range 1.5 - 10) and 40 months (range 12 - 74). Assessment variables included a standardized questionnaire, medical history, voiding diary, gynecologic examination with cough stress test in supine and standing position, 24-hour padtest and ultrasound. To evaluate possible variables influencing the long-term outcome the rates of healing of stress incontinence and the rates of satisfaction ("very good" or "good") were determined in patients. Results: After 3 months 91 % had no urinary stress incontinence and it had improved in 7 %, after 40 months these rates were 80 % and 14 %. The rates of satisfaction were 92 % after 3 months and 81 % after 40 months. The reasons for dissatisfaction with the outcome after 40 months were a persistence of stress incontinence in 25 % and urgency or urge incontinence in 96 %. Factors which significantly reduced the rates of continence and satisfaction were age >= 70, and women with urge incontinence postoperatively. In addition, the degree of preoperative stress incontinence (I° - III°) significantly influenced the cure rate. Furthermore, the rate of satisfaction was influenced by preoperative mixed incontinence and the experience of the surgeon. Factors with no influence were body mass index, previous incontinence surgeries, low urethra pressure < 25 cm H2O and concomitant surgeries.