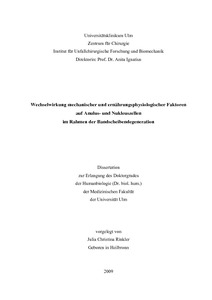 Intervertebral disc (IVD) degeneration is characterized by alterations of the matrix structure and its biochemical composition, which may cause back pain. Reduction of nutrient supply (glucose), extracellular osmolarity and pH as well as variations of oxygen concentration are the principal alterations occurring in the microenvironment of IVD-cells during degeneration. In the present study, the effects of environmental alterations on gene expression of IVD-tissue proteins and matrix-degrading enzymes were analysed. Moreover, the influence of a varied microenvironment on IVD-cell responsivity to mechanical loading was investigated. IVD-cells were separately isolated from the annulus fibrosus (AF) and nucleus pulposus (NP) of bovine and human IVD-tissue. After cell expansion, NP-cells were seeded into alginate beads, while AF-cells were either cultured in monolayer or collagen-type-I-gels. In each experiment, a single environmental factor (osmolarity, glucose, oxygen, pH) was varied, whereas one condition reflected the average physiological value. All other factors remained normal. After 24 hours of incubation, IVD-cells were mechanically stimulated by their predominant physiological load (AF: cyclic strain, NP: cyclic hydrostatic pressure), while mechanically unloaded cell cultures of each respective condition served as controls. Directly after stimulation, gene expression was determined by quantitative RT-PCR, normalized to GAPDH and to the respective standard condition. Reduced pH and glucose supply significantly down-regulated gene expression of aggrecan, collagen-type-I and collagen-type-II by bovine NP-cells. Osmotic alterations influenced mainly aggrecan expression, whereas oxygen variations had minor effects. Mechanically induced effects on gene expression were modest. Under low glucose supply, mechanical loading tended to increase Sox-9, collagen-type-I and type-II, while matrix metalloproteinases were slightly down-regulated by exemplary human NP-cells. Under acidic pH, mechanical loading tended to reduce the down-regulation of matrix components in bovine NP-cells. These results suggest that degenerative alterations of the IVD-microenvironment may influence the degradation of the IVD-tissue by an imbalanced matrix turnover. Dynamic loading might have beneficial effects on IVD-matrix maintenance in individual donors.