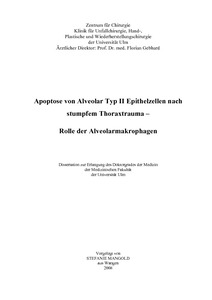 Alveolar type 2 (AT2) cell apoptosis is an important mechanism during lung inflammation, lung injury and regeneration. Blunt chest trauma has been shown to activate inflammatory cells such as alveolar macrophages (AM) or neutrophils (PMN), resulting in an inflammatory response. The present study was performed to determine the capacity of different components / cells of the alveolar compartment like AM to induce apoptosis in AT2 cells following blunt chest trauma. To study this, male Sprague Dawley rats were subjected to either sham procedure or blunt chest trauma induced by a single blast wave. Various time points after injury (6 h - 7 d) lungs were analyzed by immunohistochemistry, stained with an anti-cytokeratin-antibody (clone MNF-116) as AT2 cell marker or antibodies directed against Caspase 3, Caspase 8, Fas, Fas ligand (FasL), BAX and BCL-2. BAL-concentrations of Fas Ligand and IL-1b were determined by ELISA. Furthermore, cultures of AT2 cells isolated from healthy rats were incubated with supernatants of AM obtained from either trauma or sham operated animals in the presence or absence of H2O2. Annexin 5 stain and TUNEL assay were used to detect apoptotic events in AT2 cells. Histological evaluation revealed that the totality of AT2 cells was significantly reduced at 48 hours following trauma. Fas, FasL, active Caspase 8 and active Caspase 3 were markedly up regulated in AT2 cells after chest trauma. BAX and BCL-2 did not show any changes between sham and trauma. In BAL fluids, IL-1b and FasL were markedly increased at 24 hours after injury. The apoptosis rate of AT2 cells incubated with supernatants from cultured AM, isolated at 48 hours following chest trauma or sham procedure, was markedly increased when compared to shams. In summary, blunt chest trauma induced apoptosis in AT2 cells via the extrinsic death receptor pathway (Fas/ FasL). Furthermore, mediators released by AM appeared to be involved in the induction of programmed cell death in AT2 cells.