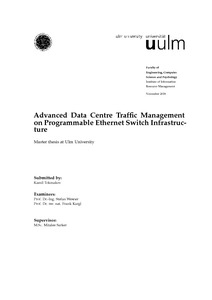 As an infrastructure to run high performance computing (HPC) applications, which represent parallel computations to solve large problems in science or business, cloud computing offers to the tenants an isolated virtualized infrastructure, where these applications span across multiple interconnected virtual machines (VMs). Such infrastructure allows to rapidly deploy and scale the amount of VMs in use due to elastic and virtualized resource share, such as CPU cores, network and storage, and hence provides feasible and cost-effective solution compared to a bare-metal deployment. HPC VMs are communicating among themselves, while running the HPC applications. However, communication performance degrades with the use of the network resources by other tenants and their services, because cloud providers often use cheap Ethernet interconnect in their infrastructure, which operates on a best-effort basis and affects overall performance of the HPC applications. Due to the limitations in virtualization and cost, low latency network technologies, such as Infiniband and Omnipath, cannot be directly introduced to improve network performance, hence, appropriate traffic management needs to be applied for latency-critical services like HPC in the Ethernet infrastructure. This thesis work proposes the traffic management for an Ethernet-based cloud infrastructure, such that HPC traffic is prioritized and has better treatment in terms of lower latency and higher share of bandwidth compared to regular traffic. As a proof-of-concept, such traffic management is implemented on the P4 software switch, bmv2, using rate limited strict priority packet scheduling to enable prioritization for HPC traffic, deficit round robin algorithm to enable scalable utilization of available network resources and metadata-based interface to introduce programmability of the traffic management via standard control plane commands. The performance of the proposed traffic management is evaluated in mininet simulation environment by comparing it with the best-effort approach and when only rate limited strict priority scheduling is applied. The results of the evaluation demonstrate that the traffic management provides higher bandwidth and lower one-way and MPI ping-pong latencies than the best-effort approach and has worse latency characteristics than strict priority scheduling, but trades off the scalability in dynamic bandwidth allocation. Therefore, this thesis requires a future work to be done to further decrease the latency and subsequently, the evaluation on a real hardware environment.