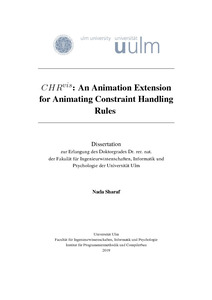 The work in the thesis presents an animation extension (CHRvis) to Constraint Handling Rules (CHR). Visualizations have always helped programmers understand data and debug programs. A picture is worth a thousand words. It can help identify where a problem is or show how something works. It can even illustrate a relation that was not clear otherwise. CHRvis aims at embedding animation and visualization features into CHR programs. It thus enables users, while executing programs, to have such executions animated. Due to the wide range of algorithms implemented through CHR, an algorithm-based animation was needed. Such animation should show at each step in time the changes to the data structure affected by the algorithm. The work aims at providing the operational semantics for CHRvis. The correctness of CHRvis programs is also discussed. Some applications of the new extension are also introduced. In addition, CHRvis was used to build a visual language for CHR. This eliminates the need of learning any syntax constructs before building CHR programs. CHRvis was also found to be effective in enhancing the learning gain of its users.