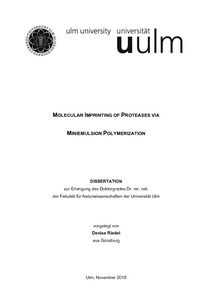 Molecularly imprinted polymers (MIPs) are synthetic binding materials and a wide range of syntheses methods have been reported in literature. The aim of this thesis was the synthesis and characterization of selective binding material for binding thermolysin (TL) as example protease and matrix metallopeptidase 9 (MMP9) in cell culture media via molecular imprinting. In the pre-polymerization complex, self- assembly between template molecule (TM) and functional monomer (FM) occurs, before the synthesis of the polymer takes place. Specific binding sites are formed in the polymer network due to the presence of the template molecule. Blank polymers (BP) or non-imprinted polymers (NIP) were synthesized and compared to the according molecularly imprinted polymer. Molecular imprinting is commonly applied for small molecules, such as nitrophenols, caffeine, and β-estradiol. For large molecules like proteins, the syntheses are more challenging due to the solubility and need of an aqueous phase during synthesis and the high flexibility of proteins. Surface imprinting is a suitable method for large molecules since the interaction between functional monomer and template molecule occurs at the surface of the polymers. A synthesis strategy was adapted and developed within this thesis for TL and MMP9.