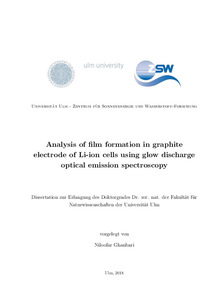 Li-ion batteries are today's most promising candidates regarding stationary and mobile electrochemical energy storage. However, performance and lifetime-limiting processes occur during their usage, which hinder the commercialization of many Li-ion cell chemistries. Employing ex-situ analysis methods, the present work studies the degradation mechanisms in Li-ion cells focusing on graphite negative electrode. A glow discharge optical emission spectroscopy (GD-OES) method is developed to record quantified multi-elemental depth profiles of graphite electrodes. Quantification of Li across the thickness of the graphite electrode lies at the center of the GD-OES analysis in the present study. Employing GD-OES depth profiling,firstly the impact of the pre-analysis rinsing for the removal of electrolyte from the graphite electrodes on their surface film was investigated. The results showed the Li content of the samples varied with the rinsing duration, indicating alteration of the surface film during electrolyte removal. Hence, identical rinsing procedure was required for each set of samples. In the second step the initial formation of solid electrolyte interphase (SEI) was studied in graphite electrodes which were charged to different lithiation degrees. Correlation of the GD-OES analysis and the electrochemical data disclosed two points: a) SEI formation begins at about the reduction potential of the additives and electrolyte solvents but continues to grow at lower potentials during Li intercalation, b) the majority of Li consumption in SEI formation is observed to take place between 0-50\% lithiation of the graphite electrode. In the next step the GD-OES depth profiling was employed to study film formation (SEI growth, Li plating) on graphite electrodes after being subject to aging tests. An approach is proposed to discriminate between SEI growth and Li plating according to an estimation based on the measured Li depth profiles. Furthermore, aged graphite electrodes were analyzed at multiple positions to map the homogeneity of SEI growth and to address current distribution across the graphite electrode based on the recorded Li content and its distribution across the coating thickness. Finally, depth profile analysis was performed on multiple positions of large-format graphite electrodes to detect local Li deposition. Two different interfaces are considered in this study, one between the immediate surface particles and the electrolyte, the other between the bulk electrode particles and the diffused electrolyte in the electrode. SEI growth and Li plating were observed to have occurred and both these interfaces but at different growth rates. The developed GD-OES depth profiling method and the presented results provide a new analysis aspect regarding cell degradation and non-uniform material utilization induced under the electrochemical test conditions and the variations in different cell formats. Such analysis can be used for validating fast charging procedures in terms of Li deposition, designing optimum cell geometries in terms of homogeneity in current distribution and material utilization, designing tailored electrodes for optimum through-plane active material utilization, and investigating the electrolyte components and additive impact in terms of the protectiveness of the induced surface film formation.