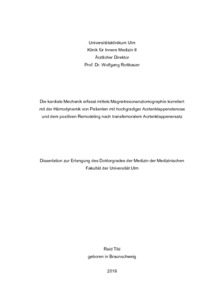 Aims: To assess left-ventricular strain parameters before and after transcatheter aortic valve replacement (TAVR) by feature tracking cardiac magnetic resonance imaging (FT CMR) and to correlate the findings to hemodynamic state and left-ventricular remodeling. Methods and results: Patients with symptomatic AS underwent FT CMR before and after TAVR. Patients were carefully evaluated by a comprehensive work-up including CMR, echocardiography and left and right heart catheterization. Thirty patients formed the study population. High-flow/high-gradient (HF/HG) aortic stenosis was diagnosed in 11 patients (36.7%), 6 patients (20.0%) exhibited low-flow/low-gradient AS (LF/LG) and 13 patients (43.3%) were classified to have so-called paradoxical low-flow/low-gradient (PLF/LG) AS. The HF/HG patients had a significantly reduced longitudinal strain which recovered after TAVR (−12.67 ± 4.60 to −15.46 ± 5.61%, p = 0.048). In the LF/LG group, an even more pronounced reduction of longitudinal strain and also an impairment of longitudinal velocity could be observed. Both parameters improved after therapy (strain: −5.06 ± 4.25 to −8.02 ± 3.28%, p = 0.045; velocity: 25.33 ± 9.63 to 37.13 ± 11.64 mm/s, p = 0.042). Patients with PLF/LG showed preserved longitudinal strain but a reduction of longitudinal velocity similar to the LF/LG group. These patients did not show a significant improvement of strain parameters after TAVR. Longitudinal velocity exhibited the highest predictive power for the identification of a low-flow state (sensitivity 75%, specificity 80%). Conclusion: Improvement of longitudinal strain parameters after TAVR is dependent on the initial hemodynamically defined AS subgroup.