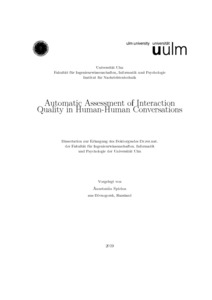 This thesis investigates an attempt to adapt the metric for the quality estimation in the ongoing dialogue from the field of human-computer spoken interaction to human-human conversation. Research related to automatic speech and language processing mainly focuses on speech recognition and language understanding. Other information from spoken language may be extracted. For example, ``paralinguistics'' targets phenomena such as emotion, age, and gender. On a higher level, especially the dialogue management, there still exists a multiplicity of not yet covered, but highly relevant issues related to the automatic processing of spoken language, namely the automatic analysis of spoken communication. This research work broadens the scope of automatic extraction of information from spoken language by addressing less researched topics in the field. Thereby, several research questions have not been sufficiently addressed related to the human-human conversation. The thesis is centred on communication and speech analytics and deals with classification. Spoken Dialogue Systems (SDSs) allow users to interact with computer systems using speech. To assess the performance of an SDS during an ongoing interaction, the Interaction Quality (IQ) metric has been introduced. It allows estimating the system's performance at any point during the interaction. The metric is based on a large set of features. They describe how an interaction has been going on. While the IQ metric has been proven to work in human-machine interaction scenarios, the approach may also help to assess the quality of human-human communication. This is, for example, of particular interest in call centres, where calls with low quality have to be found for training and evaluation purposes. The main field of applications is the automatic classification of calls in call centres and the automatic filtering of troublesome conversations. Besides, obtaining the model of the IQ for human-human conversations can help to improve SDSs in the future. Human-human conversations are more flexible than human-computer spoken interaction. It is essential to reveal factors that can improve the IQ in human-human conversations. As a results, these factors can be applied in SDS to make the computer more humanlike and more user-friendly than it used to be. During this research work, we performed an adaptation and modification of the initial IQ metric (designed for human-computer spoken interaction). The computations were accomplished with different classification algorithms. Moreover, many aspects were studied and analysed during the research. Some aspects describe speech and conversation such as overlaps, emotions, etc. Other aspects relate to the parameters of the models. It should be mentioned that our work is based on the corpus designed specially for this task. Initially, it consists of the raw audio files with human-human task-oriented dialogues, which then were preprocessed, namely different features were automatically / manually extracted. To sum it up, we believe that our work is only the first step, which will be developed in this way and which may be helpful for both fields: call centres and SDSs.