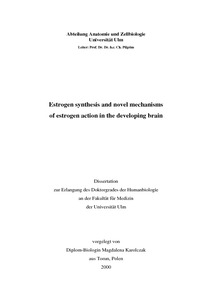 Estrogen synthesized in situ in the CNS by the enzyme aromatase plays an important role during brain development. In particular, estrogen stimulates the morphological and functional differentiation of distinct neural systems but is also a critical factor for the determination of sex-specific properties of neural structures and functions. The present study focuses on three different aspects of estrogen action in the developing brain. The first part is concerned with the developmental expression of the estrogen-synthesizing enzyme aromatase and the nuclear estrogen receptor (ER-Ò) in the Hyp/POA of male and female mice. Sex differences in aromatase as well as in ER-Ò expression pattern were found perinatally with higher expression levels in males. These data demonstrate that the onset of sexual differentiation of hypothalamic functions coincides with a sex-specific expression pattern of aromatase and ER-Ò. The second part focuses on the developmental regulation of aromatase in the Hyp/POA. Our data showed that circulating androgens not only are the substrate for the aromatase but also directly stimulate the expression of aromatase in the hypothalamus through an androgen receptor-dependent mechanism. The third part of this study is devoted to "non-classical" cellular steroid hormone signaling through specific plasma membrane receptors coupled to distinct intracellular signaling cascades. We describe here that the cAMP/PKA/pCREB signaling pathway appears to be activated in midbrain neurons, whereas in astroglial cells the MAP-kinase pathway is induced. Our study also shows that classical and non-classical estrogen signaling are both involved in estrogen-mediated developmental effects on dopaminergic cells. This is specifically shown by the gene expression analysis data which revealed different genes to be regulated by classical or non-classical estrogen signaling. Taken together, our findings demonstrate that estrogen contributes to different processes of neuronal differentiation. This includes sex-specific aspects of cellular development in the hypothalamus/POA which appear to result from sex differences in local estrogen synthesis. On the other hand, estrogen affects, irrespective of the sex, the morphological and functional differentiation of midbrain dopaminergic neurons.