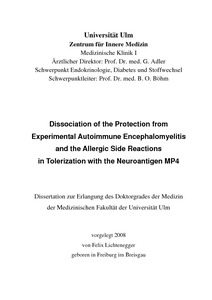 Administration of autoantigens under conditions that induce type 2 immunity frequently leads to protection from T cell-mediated autoimmune diseases. Such treatments, however, are inherently linked to the induction of IgG1 Abs and to the risk of triggering anaphylactic reactions. We studied the therapeutic benefit vs. risk of immune deviation in experimental allergic encephalomyelitis of SJL mice induced by MP4, a myelin basic protein-proteolipid protein (PLP) fusion protein. MP4 administration in IFA induced type 2 T cell immunity, IgG1 Abs, and experimental allergic encephalomyelitis protection, and all three were enhanced by repeat injections. Despite high Ab titers, anaphylactic side reactions were not observed when MP4 was repeatedly injected in IFA or as soluble Ag s.c. In contrast, lethal anaphylaxis was seen after s.c. injection of soluble PLP:139 - 151 peptide, but not when the peptide was reinjected in IFA. Therefore, the Ab response accompanying the immune therapy constituted an anaphylactic risk factor only when the autoantigen was not retained in an adjuvant and when it was small enough to be readily disseminated within the body. Taken together, our data show that treatment regimens can be designed to boost the protective type 2 T cell response while avoiding the risk of Ab-mediated allergic side effects.

Lichtenegger, Felix (2009): Dissociation of the protection from experimental autoimmune enzephalomyelitis and the allergic side reactions in tolerization with the neuroantigen MP4. Open Access Repositorium der Universität Ulm. Dissertation. http://dx.doi.org/10.18725/OPARU-1576