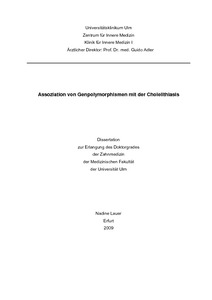 OBJECTIVES: The beta3-adrenergic receptor (ADRB3) is a transmembrane receptor highly expressed in adipose tissue and thought to be involved in the regulation of lipolysis. ADRB3 is also highly expressed in gallbladder tissue where it may be involved in gallbladder contraction. Because polymorphisms of ADRB3 are present in populations with a high prevalence of gallstones (e.g. Pima-Indians, obese subjects), we hypothesized that known polymorphisms for ADRB3 (Trp64Arg) may represent an independent risk factor for gallstone disease. METHODS: The EMIL cross-sectional study investigated the health behavior and prevalence of chronic diseases in a small Southwestern German town of 12,475 inhabitants. From 3,893 randomly selected citizens 2,147 subjects were enrolled and screened for gallstones employing ultrasonography. Blood samples were drawn for biochemical analysis and isolation of genomic DNA. ADBR3 genotypes were determined by TaqMan SNP Assay. RESULTS: We identified 171 (8 %) gallstone carriers of whom 143 participated (46 male, 97 female), with a mean age of 51.4 and a mean BMI of 29.3 kg/m2. For these subjects an age, gender and BMI matched partner without gallstones was recruited from the study population. Genotyping for ADRB3 revealed an Arg64 allele frequency of 5.9 versus 0.7 % (HR = 11.9, P < 0.05) compared with controls. CONCLUSIONS: Our results indicate that the ADRB3 Trp64Arg polymorphism is associated with gallstone disease thereby representing a genetic marker that identifies subjects at higher risk for gallstone formation.