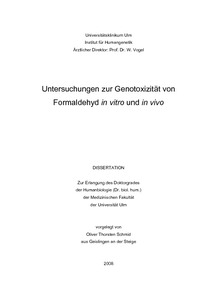 Formaldehyde (FA) is an important industrial compound. It has also applications as a disinfectant and preservative. Furthermore, FA is naturally occurring in cells, tissues and body fluids. It is known to be genotoxic; the primary DNA alterations induced by FA are DNA-protein crosslinks (DPX). The aim of this work was to characterize various aspects of the genotoxicity of FA in vitro and in vivo. The concentration-effect relationship of genotoxic effects of FA in three genotoxicity tests was characterized by fitting different curves to the data. The results suggest a thresholded mechanism of FA-induced genotoxic effects. The induction and the repair of FA-induced DPX were investigated in A549 human lung cells and primary human nasal epithelial cells. The susceptibility of both cell types for the induction of DPX is very similar. DPX are repaired by these cells within about 8 hours. The expression of FA-metabolizing enzymes (Glutathion-dependant FA dehydrogenase, aldehyd-dehydrogenase 1A1, aldehyd-dehydrogenase 2) in A549 cells was analyzed after FA-exposure for 1,4 and 24 hours by real time PCR. No significant alterations were measured. The induction of genotoxic effects by FA was investigated in human blood cultures. The results show that high amounts of DPX are needed at the start of the culture to induce cytogenetic effects in lymphocytes. Although several biomonitoring studies reported genotoxic effects in the blood of subjects exposed to FA, the results shown here suggest that it is very unlikely that such effects are actually related to FA-exposure. An inhalation study with human volunteers was conducted to assess local mutagenic effects of FA by the micronucleus test with exfoliated buccal mucosa cells. FA peak exposure was up to 1 ppm and the cumulative dose was 13,5 ppm h over two weeks. The results indicate that under these exposure conditions, FA does not induce micronuclei in buccal mucosa cells.