Role of complement receptors C5aR and C5L2 in bone metabolism 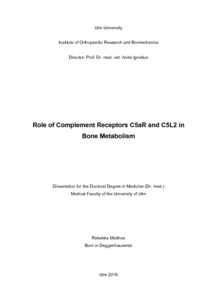 The bone development, growth and regeneration are tightly regulated by the immune system and, particularly, by the complement system. An activation of the complement cascade leads amongst others to the production of the anaphylatoxin C5a, which, via its receptors, C5aR (C5aR1) or C5L2 (C5aR2), activates downstream signaling events. Both C5a receptors are expressed on bone cells, such as osteoclasts and osteoblasts, as well as on immune cells. Dysregulations of the complement system, including abnormally elevated levels of C5a can lead to diseases affecting the bone, including osteoarthritis or rheumatoid arthritis. Interestingly, the roles of C5aR and C5L2 in physiological bone metabolism have not yet been investigated. To better understand the role of the complement receptors C5aR and C5L2 in physiological bone homeostasis under non-inflammatory conditions, the aim of the present study was to investigate the bone phenotype of receptor knock-out mice. The knock-out mice lacking either the receptor C5aR or C5L2 were analyzed with a non-destructive bending test, micro-computed tomography and dynamic histomorphometry. The results of this study show that the C5aR knock-out mice had an increased cortical and trabecular bone mass and an increased bending stiffness, resulting from a decreased number of osteoclasts. C5L2 knock-out mice also showed an increased bone mass due to an increased number of osteoblasts, while the number of osteoclasts remained unaffected. The phenotype was less distinct compared to the mice with C5aR knock-out.