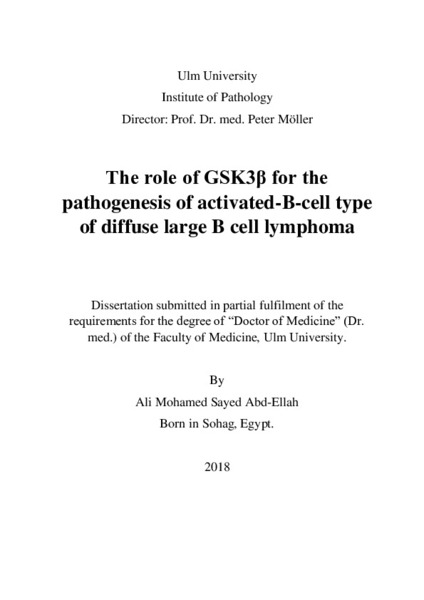 Activated B cell like type of Diffuse Large B cell lymphoma (ABC-DLBCL) is one of the most aggressive types of Non-Hodgkin’s lymphoma and shows a bad prognosis even with treatment using the R-CHOP protocol. The hallmark of this type of DLBCL is the constitutive formation of a protein complex called the CBM complex, which is composed of CARMA1, BCL10 and MALT1. Moreover, the constitutive CBM complex formation has been shown to be responsible for the uncontrolled and stimulus independent activation of NF-κB signalling pathway. Glycogen synthase kinase 3β (GSK3β) is a protein kinase which was identified recently to be required for RelB degradation in T lymphocytes. Moreover, GSK3β was shown to be recruited to oncogenic CARMA1 in DLBCL cell lines. However, the role of GSK3β in CBM complex formation and the pathogenesis of ABC-DLBCL remains unravelled. The data presented in this thesis demonstrate that inhibition of GSK3β in Jurkat model system attenuated antigen receptor mediated MALT1 endoprotease activity evidenced by reduced cleavage of CYLD1 protein and RelB degradation. Moreover, GSK3β inhibition attenuated the antigen receptor induced canonical NF-κB activation as demonstrated by the reduction of stimulus induced IκBα degradation, the IKK complex activity, the NF-κB DNA binding activity and the expression of NF-κB target genes. This effect appears to be due to an attenuated CBM complex formation observed upon GSK3β inhibition. Moreover, GSK3β found to be a BCL10 kinase as it is capable of phosphorylating BCL10 at additional sites to the previously reported IKK2 mediated serine residues. The constitutive CBM complex dependent ABC-DLBCL cell lines showed also an attenuated proliferation upon the inhibition of GSK3β. However, the effect of GSK3β inhibition on GC-DLBCL cell proliferation was either attenuation or augmentation probably due to the activation of Wnt/β-catenin signalling pathway. In addition, MALT1 endoprotease activity and constitutive CBM complex formation in DLBCL cell lines were attenuated upon inhibition of GSK3β. Besides, the expression of NF-κB target gene BIRC3 was decreased in ABC- but not GC-DLBCL cells upon GSK3β inhibition. However, GSK3β plays a multi-faceted role in the pathogenesis of DLBCL not confined to NF-κB signalling pathway. The establishment of new immunohistochemistry protocols using antibodies specific for the GSK3β-mediated BCL10 phosphorylation sites might improve the ability of this technique to differentiate between ABC- and GC-DLBCL without the need of microarray analysis which is not available for daily diagnostic routine. Taken together, this study presented BCL10 phosphorylation as a novel regulatory mechanism by which GSK3β mediates the MALT1 endoprotease activity, CBM complex formation and the NF-κB signalling in activated T cells as well as the pathogenesis of DLBCL.