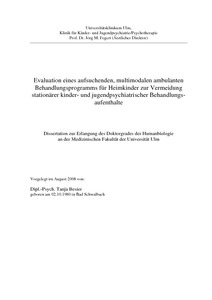 Adolescents in residential care are a high-risk population for psychiatric disorders. Due to limited access to outpatient treatment, crises often result in psychiatric hospitalizations. These are often accompanied by termination of supportive relationships, which increases the risk for further problems. To minimize hospitalizations and to stabilize the psychological state of these adolescents a home-treatment intervention program based on psychiatric liaison-services was developed and evaluated, comparing it to standard medical care (SMC). The intervention was applied in 11 German residential group homes (N = 288, M = 14.1 years), while adolescents from 15 institutions (N = 336, M = 13.6 years) served as a comparison group (SMC). During an observation period of 12 months the frequency and duration of psychiatric inpatient treatment episodes were documented consecutively, whereas emotional and behavioral problems, psychosocial functioning and quality of life were assessed at baseline and at 6 and 12 months post-intervention. 80 % of the adolescents in both groups showed high levels of emotional and behavioral problems. However, admissions to psychiatric wards occurred in less than ten percent in both groups. Compared to SMC, hospitalizations were of shorter duration in the intervention group (1.30 vs. 2.47 days per head within 12 months). The level of outpatient treatment for psychiatric problems was significantly increased in the study group, whereas less than 50 % in the control group (SMC) reported to receive any kind of psychosocial treatment. In both groups, behavioral problems decreased over time, whereas an increase in psychosocial functioning and quality of life could be observed. Thus, applying a home-treatment intervention program to children in residential care helps to stabilize the developmental course of this high-risk population by shortening psychiatric inpatient treatment, while increasing the level of outpatient treatment for existing mental health problems.