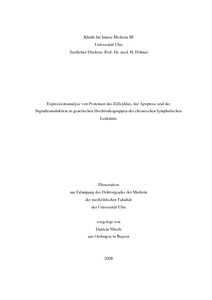 Chronic lymphocytic leukaemia (CLL) is a biologically and clinically heterogeneous disease. Deletions at 11q where the ATM gene is located and 17p affecting the TP53 tumor suppressor gene have been associated with a poor outcome. So far protein expression is not well examined in the different genetic CLL subgroups. In this study the proteins p53, ATM and p21 detecting DNA damage, the cell cycle regulator p27 and a subset of the IAP-family (XIAP, survivin) as well as two members of the BCL-2 family (BCL-2, BAX) were examined by Western blotting. 54 CLL cases derived from the subgroups with deletion 11q (n = 23), deletion 17p (n = 15) or a normal karyotype (n = 16) were studied and compared to the cell lines EHEB, JVM-2 and Jurkat. For p27, BCL-2 and BAX variability in the expression level was observed but independently of the genetic subgroups. Regarding XIAP no significant variation in the expression levels were observed. Within the 11q deletion subgroup, the ATM level was reduced or absent in 6 out of 15 cases tested with the remaining cases showing ATM levels comparable to CLL cases without loss of 11q. In contrast, all cases with 17p exhibited a strong expression of p53, whereas in the subgroups without 17p deletion p53 protein expression was detectable only in 4 cases. In 3 out of these 4 cases, a mutation was detectable by DHPLC analysis and confirmed by DNA sequencing. In the remaining case no mutation was detectable in the p53 gene. In conclusion, the 17q deletion subgroup was the only group with a consistently high level of p53 protein expression indicating that p53 is the affected gene in this subgroup. In a subset of cases with normal karyotype, a mutation of the p53 gene results in p53 overexpression. In contrast, ATM protein expression appears to be affected only in a subset of the 11q deletion cases indicating a possible role of additional candidate genes.