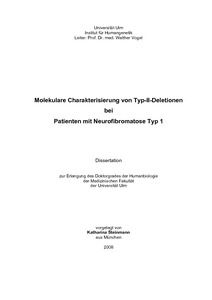 Approximately 5% of patients with neurofibromatosis type 1 (NF1) exhibit gross deletions that encompass the NF1 gene and its flanking regions. The breakpoints of the common 1.4-Mb (type 1) deletions are located within low-copy repeats (NF1-REPs) and cluster within a 3.4-kb hotspot of nonallelic homologous recombination (NAHR). Here, we present the first comprehensive breakpoint analysis of type 2 deletions, which are a second type of recurring NF1 gene deletion. Type 2 deletions span 1.2 Mb and are characterized by breakpoints located within the SUZ12 gene and its pseudogene, which closely flank the NF1-REPs. Breakpoint analysis of 13 independent type 2 deletions did not reveal any obvious hotspots of NAHR. However, an overrepresentation of polypyrimidine/polypurine tracts and triplex-forming sequences was noted in the breakpoint regions that could have facilitated NAHR. Intriguingly, all 13 type 2 deletions identified so far are characterized by somatic mosaicism, which indicates a positional preference for mitotic NAHR within the NF1 gene region. Indeed, whereas interchromosomal meiotic NAHR occurs between the NF1-REPs giving rise to type 1 deletions, NAHR during mitosis appears to occur intrachromosomally between the SUZ12 gene and its pseudogene, thereby generating type 2 deletions. Such a clear distinction between the preferred sites of mitotic versus meiotic NAHR is unprecedented in any other genomic disorder induced by the local genomic architecture. Additionally, 12 of the 13 mosaic type 2 deletions were found in females. The marked female preponderance among mosaic type 2 deletions contrasts with the equal sex distribution noted for type 1 and/or atypical NF1 deletions. Although an influence of chromatin structure was strongly suspected, no sex-specific differences in the methylation pattern exhibited by the SUZ12 gene were apparent that could explain the higher rate of mitotic recombination in females.