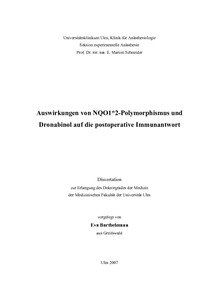 Serious post-operative complications such as the systemic inflammatory response syndrome (SIRS) and sepsis can result from dysregulation of the immune response. In this context, we investigated the influences of NQO1*2, an inactivating polymorphism of the antioxidant enzyme NQO1, as well as the therapeutic cannabinoid Dronabinol on the immune response after surgery. The trial was designed as a placebo-controlled, randomized and anonymous study, analysing the data of 95 patients with prostate cancer who underwent radical prostatectomy. Perioperatively, patients received either Dronabinol or a placebo. Before surgery as well as on the first and the second day after surgery, the immune response was quantified using Multiplexed Bead Technology to determine plasma levels of several cytokines and matrix metalloproteinases (MMP). To investigate the influence of Dronabinol on the immune response under mutation conditions, NQO1-genotyping was performed by PCR and Pyrosequencing. The distribution of genotypes found in prostatic adenocarcinoma patients (69.5 % wild-type C/C, 25.3 % heterozygous C/T, 5.2 % homozygous T/T) differed from healthy controls shown in literature (73.4 % C/C, 25.0 % C/T, 1.6 % T/T). These data suggest an association between prostate cancer and the NQO1*2-polymorphism with an increased occurrence of the homozygous mutation. Before surgery, patients with one or two mutated NQO1*2-alleles showed significantly lower concentrations of the anti-inflammatory cytokines IL-10 and IL-13. Comparisons of perioperative cytokine and MMP concentrations depending on NQO1*2 and Dronabinol furthermore suggest that the effect of Dronabinol on the immune response after surgery depends on the NQO1 genotype. Further investigations appear necessary and useful to verify and reveal the role of the examined parameters in the context of perioperative inflammatory processes.