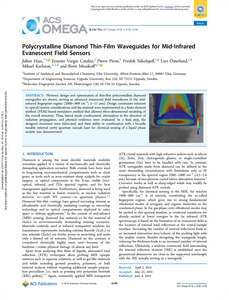 Photonic design and optimization of thin-film polycrystalline diamond waveguides are shown, serving as advanced evanescent field transducers in the mid-infrared fingerprint regime (2000–909 cm–1; 5–11 μm). Design constraints inherent to optical/system considerations and the material were implemented in a finite element method (FEM)-based simulation method that allowed three-dimensional modeling of the overall structure. Thus, lateral mode confinement, attenuation in the direction of radiation propagation, and physical resilience were evaluated. In a final step, the designed structures were fabricated, and their utility in combination with a broadly tunable external cavity quantum cascade laser for chemical sensing of a liquid phase analyte was demonstrated.