Biophysical and structural analysis of the chemokine receptors CCR2A and CCR3, leading to a 2.7 Å resolution structure of CCR2A 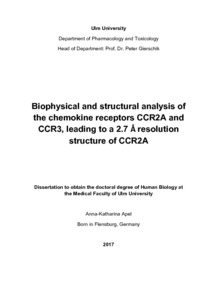 The CC chemokine receptors 2 and 3 (CCR2 and 3) belong to the family of class A G-protein-coupled receptors (GPCRs). Both receptors are involved in inflammatory disease and play a role in neurogenic and metabolic disease, as well as HIV and cancer. Despite the investment in multiple clinical trials, no molecule has reached the marked so far. This work describes the generation of thermostabilized CCR3 for crystallization, as well as two independent crystal structures of CCR2A in complex with the dual CCR2/CCR5 orthosteric antagonist EX932 (MK-0812) at 3.3 Å (full-length, rubredoxin and 5 point mutations) and 2.7 Å (N- and C-terminally truncated). The structures show the expected structural signature of an inactive GPCR and provide a clear explanation for the key role of residue E291(7.39) in high-affinity binding of several orthosteric CCR2 antagonists. Models of co-structures for the structurally diverse pyrimidine amide class of CCR2 antagonists show an interaction with the non-conserved His121(3.33), resulting in a significant selectivity over CCR5. This work will give the basis for future construct design of crystallizable CCR3 and will facilitate drug discovery efforts directed toward highly selective CCR2 antagonists.