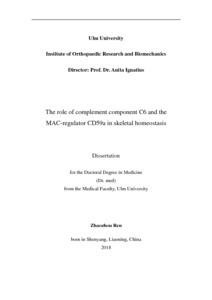 The terminal complement complex (TCC) is the final stage of complement activation and has been shown to contribute to the pathogenesis of skeletal disorders in inflammatory conditions, such as rheumatoid arthritis and osteoarthritis. However, the effect of the TCC on bone homeostasis is investigated to a lesser extent. Therefore, the phenotypes of trabecular and cortical bone were analyzed in C6-deficient mice, which lack the essential component of TCC, and in CD59a-knockout mice, which lack the negative regulator of the TCC. Here, we report that C6-deficient mice display a significant decrease in trabecular bone volume and a slight decrease in cortical mineral density. Further histomorphometric measurements show that osteopenia in C6-deficient mice is associated with increased osteoclast activity. With regards to biomechanical phenotypes, bending stiffness and cortical thickness are not significantly different between C6-deficient and wild type mice. Additionally, global deletion of CD59a slightly reduces mineral density of cortex, with no alterations in cortical thickness. Although trabecular bone volume in femur of CD59a-knockout mice is lower than that of wild type mice, spinal bone volume is unaltered. Collectively, as a lack of TCC-component or TCC-inhibition is not sufficient for maintaining normal homeostatic structure, our results suggest that TCC plays an essential role in preserving bone mass and skeletal homeostasis.