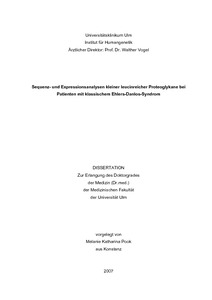 Classical Ehlers-Danlos Syndrome (EDS) is a rare disorder of connective tissue. So far, mutations in COL5A1 or COL5A2 or haploinsufficiency of one of these genes could be identified in only about half of the patients tested. This suggests genetic heterogeneity of the disease. The mouse knock out model for the small leucine rich proteoglycan decorin shows an important role for decorin in structure collagen assembly and control of fibril growth. Also, significant downregulation of decorin gene expression was shown in a group of patients with classical EDS. However, mutations of exons or splice junctions could not be found in the decorin gene within this patient group. The expression of decorin can be modulated by numerous factors such as TNF-alpha, IL-1beta and TGF-beta, and decorin promoter Ib contains several binding motifs for them. Therefore we analysed the sequence of promoter Ib in patients of this collective for mutations that could convey downregulation of decorin gene expression. Though, besides a polymorphism also detectable amongst fifty healthy individuals, we could not demonstrate any mutation in the sequence of promoter Ib of the decorin gene. So very probably mutations in the decorin promoter are not causal for decorin downregulation in these patients. Lumican is a proteoglycan similar to decorin. Its knock out mouse model also shows alterations in connective tissue formation and tensile strength, although the main symptom is a profound change in corneal structure with progressive clouding of the cornea. We investigated the expression of the proteoglycan lumican by quantitative northern blot in the same collective of patients for which decorin downregulation was previously demonstrated. Here we found a significant downregulation of the expression of lumican. This combined downregulation of decorin and lumican in patients with classical EDS may be due to a conjoint regulation of these two proteoglycans. Maybe collagen V genes could be involved in this regulation.