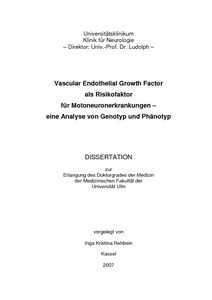 Lambrechts et al. reported in 2003 that homozygotes with specific haplotypes (AAG; AGG) of VEGF increase the risk of amyotrophic lateral sclerosis (ALS). This result was found in three of four cohorts and could not be reproduced in a Dutch population (Van Vught et al., 2005) and in our study of more than 1000 patients and controls (Fernández-Santiago et al., 2006). We could not show a significant association for single marker analysis or haplotype, but after stratification for gender the rs1570360 G-allele showed an association with affection status in females (p = 0.036; Fernández-Santiago et al., 2006). This explains the non-homogenous results of Lambrechts et al. by an overrepresentation of females in the at-risk cohorts. We further analysed 514 patients and 628 controls and hypothesized that the association with gender might be secondary either to bulbar onset or to disease onset in old age - both known to be overrepresented in female ALS victims. We could not show associations to bulbar onset, but demonstrated association of rs1570360 G-allele with female gender (p = 0.0582), which got stronger if only females > 64 years were considered (p = 0.0443). Association with the age of the entire group was even more convincing (p = 0.0216). Results of rs699947 C-allele were less impressive (p = 0.0533, p = 0.0490, p = 0.0667). Analysis of risk alleles on genotype level showed associations in controls for the entire group > 64 years (p = 0.0305) and for females > 64 years (p = 0.0384). This explains the results by Lambrechts et al. also by bias of age and suggests that a definite answer if VEGF is a risk factor for ALS can only be given by studies of the protein and potentially angiogenin, which controls VEGF expression (Greenway et al, 2006). Our observations also raise the possibility that the alleles rs1579360 G and rs699947 C are a longevity factor by decreasing risks associated with old age, in particular of cancer which is associated with high VEGF expression (Pouysségur et al.).