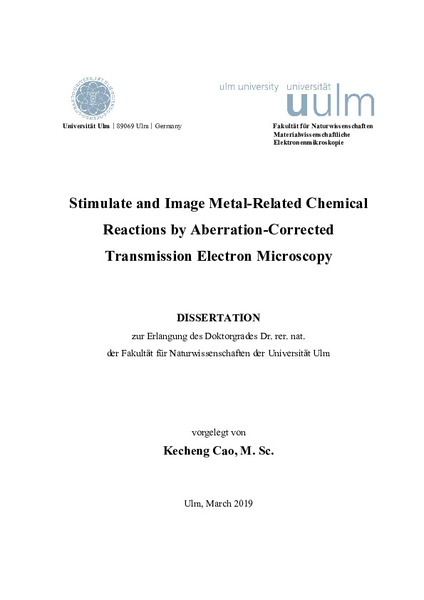 The research presented in this cumulative thesis focuses on the development of the methodology of low-voltage aberration-corrected high-resolution transmission electron microscopy (LV-ACHRTEM) for stimulating and observing metal involved molecular chemical reactions. The dissertation is based on four peer-reviewed journal articles, which were the result of an interdisciplinary research involving TEM technology, chemistry, catalysis, material science and physics being conducted at the Electron Microscopy Group of Materials Science at Ulm University. In TEM, the interactions between the incident high-energetic electrons and the sample atoms endow scientists with the opportunities to explore the structural and spectral information of materials. For bio-molecules, great advances have been recently demonstrated in cryo-TEM taking advances of direct electron detection and improved data reconstruction techniques. With the development of aberration correctors, atomically-resolved TEM imaging became reality, provided that the interactions between the incident electrons and the sample do not prevent this. Now, for the first time, there is the potential for discovering the atomic structure and dynamic of materials and even single molecules. This gives the opportunity to realize the ultimate target of chemistry: observing and controlling molecular reactions at the atomic level. Nowadays, studying molecule with atomic resolution represents itself one very challenging areas of TEM. Individual molecules including inorganic molecules ([W6I142-]n, fullerene etc.) and organic molecules (ortho-carborane, C3-tribromide etc.), have been investigated by ACTEM for studying their structure and/or dynamics. Although the high-energy incident electrons are unavoidable for TEM experiments, they inevitably can damage the specimen during the experiment. It is the ‘observer effect’ in TEM, which means incident electrons necessarily change the specimen. The damage in TEM includes knock-on damages, radiolysis and heating. Low-voltage transmission electron microscopy, low-dose imaging techniques, and cryo-TEM are the main methods that have been developed for protecting specimens from beam damage. The only possible way to lower the specimen’s knock-on displacement damage threshold is reducing the accelerating voltage of incident electrons. LV-ACHRTEM defined for accelerating voltages lower than 80 kV, becomes the most powerful tool to study the electron-irradiationsensitive materials like graphene, carbon nanotubes and 2D transition metal dichalcogenide, to name a few of them. In this work, transition metal molecules including transition metal clusters contain metal atoms less than 30 and transition metal diatomic molecule are the objects of study for investigating the catalytic performance and dynamics, nucleation process and confirming the existence of metal diatomic molecule. For the LV-ACTEM experiment of transition metal molecules, it is important and necessary to understand how the electron beam affects different molecules through its interactions. Furthermore, the aim is to applying high energy electron beam as a stimulus for driving molecular reactions and simultaneously as a probe for monitoring the reaction with atomic resolution. Furthermore, we may be able to create new structures by manipulations with the electron beam. Combining with the LV-ACHRTEM technology, we utilize the kinetic energy transferred from the incident electron beam to the atoms in the specimen to stimulate and image the metal-related molecular reactions. A single walled carbon nanotube (SWNT) with its properties of excellent electrical and thermal conductivity, atomic thin and tough structure is applied as nano test tube for the encapsulating molecule-level transition metal clusters and Rhenium diatomic molecule [Ⅰ-Ⅳ]. Owing to the good electrical and thermal conductivity of SWNT, the ionization and heating processes caused by inelastic scattering are negligible. The inevitable elastic scattering is the main interaction between the electron beam and our system. The kinetic energy transferred from the incident electron beam to the specimen by elastic scattering are determined by the accelerating voltage and precisely controlled by the dose rate to stimulate the physical and chemical processes with similar threshold energy. Thus, by approach and after careful analysis of time-dependent image series, image calculations and theoretical modelling, the atomic dynamics of the growth of SWNT catalyzed by Re cluster are directly observed [Ⅰ]; the carbon reconstruction reactions catalyzed by 14 kinds of transition metal clusters are imaged with atomic resolution and are semiquantitatively compared [Ⅱ]; the in-situ nucleation of metal nanocrystals are realized and observed which proved the nucleation of metal to undergo the two-step nucleation mechanism [Ⅲ]; the Rhenium diatomic molecule containing alterable multiple bond are discovered [Ⅳ].