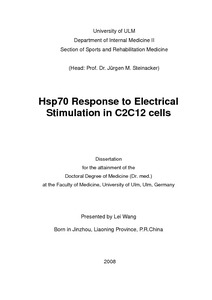 Electrical stimulation (ES) has been widely used in experimental and clinical settings and shown effect on cellular response or clinical benefit, however, mechanisms underlying ES-induced effects are not well understood. This study investigates ES-induced Hsp70 response along with regulation of cell growth and apoptosis in C2C12 cells. Cultured cells (by confluence at 75 %) were electrically stimulated at 13 V in different groups (A: 12 Hz, 11 min; B: 12 Hz, 90 min; C: 100 Hz, 12 min), and were harvested before ES, immediately and at 1 h, 4 h, 8 h and 12 h after ES, respectively. Gene expression for Hsp70, regulatory factors for cell growth including IGF-1, cyclin D1 and P21 as well as for apoptosis including Bax, Bcl2, AIF and Apaf-1 was analyzed using real-time PCR, with ß2-microglobulin serving as internal reference gene. Additionally, Hsp70 at protein level was determined by Western-blot. ES in group A caused modest biphasic Hsp70 response at mRNA level with slightly later increase at protein level, augmented expression in IGF-1 and cyclin D1 as well as depressed Bax/Bcl2 index and increase in AIF and Apaf-1; in group B there was clear increase in Hsp70 at mRNA and protein level, along with an increase in IGF-1, cyclin D1, P21 and Bax/Bcl2 index; in group C there was high Hsp70 at mRNA level but no change at protein level with concomitant increase in P21 and Bax/Bcl2 index. Thus, ES leads to distinct Hsp70 and changes in regulation of cell growth and apoptosis. Modest Hsp70 response at mRNA level with slightly increase at protein level was associated with cell proliferation and depressed apoptosis while high Hsp70 response at mRNA without change at protein level was linked to cell differentiation and increased apoptotic response. ES at low frequency for long duration led to distinct Hsp70 response at both mRNA and protein level and augmented regulation in cell growth and differentiation with increased apoptotic response. The characteristics of ES seemed to determine the pattern and time course of Hsp70 response as well as regulation of cell growth and apoptosis.