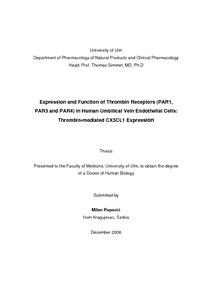 Upregulation of the inflammatory pathways is a major event in pathological condition. Thrombin, the key protease involved in coagulation process has been desribed as a potent activator of endothelial cells. This study shows that response to thrombin might be potentiated in endothelial cells by infection via a common virus, the human cytomegalovirus (HCMV). Indeed, HCMV induces expression of thrombin receptors PAR1 and PAR3 but not of PAR4. This effect of HCMV may be relevant for various functions of the endothelium in particular for the migration of leukocytes into tissues, which is essential for inflammation and host response to infection. Migration is dependent on small chemotactic cytokines called chemokinesa mong them Fractalkine (CX3CL1, FKN) is the unique member of the CX3C chemokine family. This study was showen that thrombin stimulation of HUVEC triggers a marked expression of FKN both at mRNA and protein levels. Flow cytometric analysis revealed that in thrombin-stimulated HUVEC FKN is present as a membrane-anchored molecule and that thrombin does not induce increase in shedding of FKN from the membrane of HUVEC. In a line with FKN function as a potent cell adhesion molecule for the circulating inflammatory cells, a co-cultivation experiment revealed that adhesion of Mono-Mac-6 to thrombin-pretreated HUVEC triggeres synthesis and potentiate release of IL-6 and MCP-1 in a FKN-dependent manner. Furthermore, the chemotactic potential of the released MCP-1 suggest an increase capacity of thrombin-stimulated HUVEC to recruit leukocytes after initial interaction with monocytes. HCMV was associated with the developpement of atherosclerosis. Increased sensitivity of HCMV-infected endothelial cells to thrombin and observation that thrombin induces fractalkine expression present a complex interplay between these mechanisms which might be of great importance in vascular inflammation such as atherosclerosis.