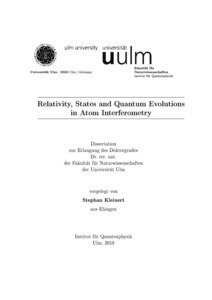 The physics of the 20th century was dominated by the fascinating effects of quantum mechanics and relativity. However, a satisfactory unification of both theories could never be achieved. Quantum gravity is still an open problem – not a theory. The purpose of this thesis is not to solve this problem, but to provide customized, theoretical tools which can model future experiments acting at the interface of gravity and quantum mechanics. Special attention is paid to a geometrical interpretation of the underlying physics. In particular, we study three different aspects: (i) we consider how Newtonian gravity enters into the quantum evolution of matter waves, (ii) we study relativistic quantum fields in the presence of arbitrary curved spacetime and (iii) we investigate the geometric effects of quantum state space on the evolution in interferometric setups – also including entanglement. For the analysis of quantum states we employ the instructive tool of quasi-probability distributions in phase space.