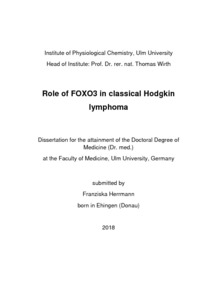 Hodgkin lymphoma (HL) is among the most common cancers in young adults. Although lasting complete remission can be achieved in the majority of patients, still 10 to 20 % cannot be cured, warranting further investigation of oncogenic mechanisms of cHL lymphomagenesis. Recently, the low expression and tumor suppressor function of the master regulator of germinal center program FOXO1 has been reported. The aim of this study was to investigate the role of another member of FOXO-family transcription factors - FOXO3 in maintenance of classical Hodgkin lymphoma (cHL). Here, we show that mRNA expression levels of FOXO3 in cHL cell lines are higher than in normal B cells and in some non-Hodgkin lymphoma cell lines. Overexpression of a constitutively active inducible form of FOXO3 upregulated expression of PRDM1α, the master regulator of plasma cell differentiation. It exclusively upregulated the full-length active form of PRDM1, PRDM1α, but not the truncated PRDM1β form with reduced transcriptional-repressive function. Luciferase reporter assay revealed that PRDM1α but not PRDM1β promoter activity was increased upon FOXO3 activation. Interestingly, overexpression of FOXO3 also induced upregulation of the master regulator of germinal center (GC) reactions BCL6. Thus, FOXO3 activation leads to upregulation of master-regulators of two different developmental stages, GC B cells and plasma cells, probably helping to sustain an abortive plasma cell phenotype in cHL. Additionally, FOXO3 induced pro-apoptotic genes of the BCL-2 family. We conclude that FOXO3 may have both, tumor-suppressive and oncogenic functions in cHL, and its expression might be tightly regulated.