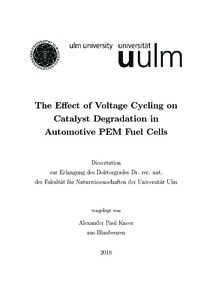 Durability and cost are the two major remaining challenges for the commercialization of fuel cells in passenger vehicles. The platinum catalyst is one of the most expensive components in a fuel cell and degrades during normal operation due to load cycling. While a reduction in platinum loading is beneficial for cost, it affects catalyst durability negatively. Therefore, an understanding of the catalyst degradation mechanism is required to increase fuel cell lifetime and lower cost. In this dissertation, the conditions that promote catalyst degradation in an automotive context and its consequences on catalyst layer microstructure are studied experimentally. In order to degrade the platinum catalyst during fuel cell operation square wave voltage cycling in hydrogen-air atmosphere is carried out as an accelerated stress test on small scale single cells. For characterization of aged samples and visualization of the degradation mechanism electrochemical techniques as well as electron microscopy are applied. The same state-of-the-art automotive membrane electrode assembly is used in all experiments in order to obtain consistent results. Voltage cycling results in the loss of electrochemically active surface area (ECSA) of the platinum catalyst which is correlated to an increase in activation overpotential. In addition, limiting current density measurements in degraded samples show that the oxygen transport resistance scales proportionally to the inverse of the platinum surface area. In the catalyst layer microstructure several changes due to redistribution of platinum are detected: platinum particle growth, precipitation of platinum in the membrane as well as the formation of a platinum depleted layer at the membrane-cathode interface. Quantification of platinum loading in aged samples reveals that only a small amount of platinum mass is lost from the catalyst layer, indicating that Ostwald ripening is the main catalyst degradation mechanism. The application of different potential cycles demonstrates that not only the number of potential transients but also the dwell time at high potentials determines ECSA loss, indicating that platinum likely dissolves during the cathodic potential transient. Analysis of different stressors shows an exponential increase in ECSA loss with upper potential limit and temperature as well as a linear increase with humidity and dwell time at the upper potential limit. ECSA loss is modeled semi-empirically using a first order kinetic rate model and coupled to an analytical performance model. The model allows the estimation of voltage losses due to catalyst degradation up to current densities of 2.0A/cm2 with good accuracy. The findings in this work can be applied to derive an operating strategy optimized regarding catalyst degradation in order to increase fuel cell lifetime under load cycling.