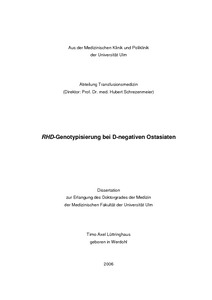 In East Asian populations RHD alleles are known to occur frequently among D-donors, requiring suitable genotyping strategies. The molecular basis of the "RHD(el)" allele previously reported in Taiwan to harbor a genomic 1013-bp deletion was questioned by several authors. STUDY DESIGN AND METHODS: The presence of the RHD gene was investigated in 126 random serologic D-blood donors from Gwangju, Southwest Korea. Four donors who typed weakly positive for the D antigen were also analyzed. RH alleles were determined by polymerase chain reaction (PCR) with sequence-specific priming (PCR-SSP) or nucleotide sequencing. RESULTS: Seventy-five percent of the serologically D-samples lacked the RHD gene, 10 percent carried the hybrid RHD-CE(2-9)-D2 or RHD-CE(2-7)-D2 alleles, 13 percent represented the RHD(K409K), and 2 percent were weak D type 15 and type 17. Among the four donors typing weak D, two carried weak D type 15, one RHD(K409K), and one the novel weak D type 43. Critical molecular characteristics of RHD(K409K) and its population frequencies were indistinguishable to those reported for the RHDel allele. CONCLUSION: Korean RHD allele frequencies are comparable to Chinese and Japanese frequencies. It is concluded that the RHDel allele may actually not exist but is identical to RHD(K409K). A practical RHD genotyping strategy applicable to D-donors in all East Asian populations was devised. The strategy requires four PCR-SSP procedures only for RHD intron 4 and exon 7 as well as RHD(K409K) and non-RHD(K409K).