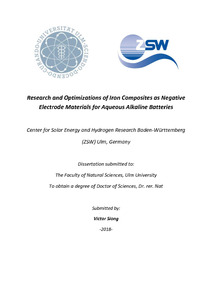 Iron is one of the most abundant elements in the earth’s crust and its applications are myriad; one of them is electrochemical storage of energy as battery electrodes. Despite the potential economic advantages, its extensive exploitation as the negative electrode material in the aqueous alkaline battery has been hampered by drawbacks such as its low charging efficiency, low discharge rates, and high self-discharge. The research in this thesis was thus set out to improve the iron negative electrode’s Coulomb efficiency, energy density and power density. In contrast to the use of pure iron and its oxides in commercial electrodes, two approaches were taken for the purpose of optimization. Firstly, the application of iron sulfide not only as an additive, but as the electrode material was examined. Secondly, a commercial activated carbon (A.C.) was adopted as the conductive scaffold for the deposition of iron oxides, iron sulfides and iron disulfides respectively. From initial feasibility tests, the applicability of iron sulfide as electrode material was affirmed, especially when electrochemically deposited on copper as a substrate. With this configuration, the electrode demonstrated an initial specific discharge capacity of 332 mAh.g-1, from which it decreased to 231 mAh.g-1 in the 10th cycle. In subsequent studies, when cycled between -0.10 V and -1.15 V vs. Hg/Hgo, the hydrothermally synthesized iron disulfide/A.C. composite demonstrated a peak specific discharge capacity of 121 mAh.g-1, whereas the magnetite/A.C. afforded 48 mAh.g-1. Both of these materials’ cycling stability improved with activated carbon as a scaffold. The iron disulfide on the composite was calculated to contribute a peak value of 108 mAh.g-1 in the 25th cycle, before gradually reducing to 77 mAh.g-1 in the 200th cycle, while magnetite’s contribution peaked at 62 mAh.g-1 in the 15th cycle before deteriorating to negligible values towards the 200th cycle. Between these two, iron disulfide’s superior discharge capacity is accredited partly to the supplementary oxidation contributions from sulfides and polysulfides in the electrolyte; these sulfides emerged from the reduction of the electrode materials in the initial cycles. In support of this conclusion, the iron sulfide electrodes demonstrated Coulomb efficiencies surpassing 100% after the initial cycles which were less efficient. The ameliorating effects of copper observed in iron sulfide’s feasibility tests were also further explored. By substituting 5 and 10 mole % of iron with copper in the activated carbon composites, the peak discharge capacity contributions from iron oxides increased from 62 mAh.g-1 to 112 mAh.g-1 and 160 mAh.g-1 respectively. With the addition of 0.1 M of sodium sulfide into the electrolyte, faradic discharge contributions from these electrode materials further increased to 270 mAh.g-1 to 281 mAh.g-1 and 290 mAh.g-1 respectively. Copper and sulfides were revealed to jointly promote the finer and more homogenous recrystallization of these iron-based particles on the scaffold’s surface over the charging and discharging cycles. Despite the necessity of further tests and optimizations, these findings present a route to enhance the utilization of iron as the negative electrode material.