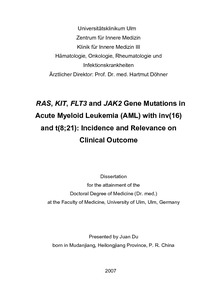 In this study we determined the incidence of RAS, KIT, FLT3, and JAK2 mutations in 101 adults patients with inv(16) and 66 patients with t(8;21)-positive AML, respectively, and evaluated their prognostic impact on clinical outcome. The mutation analyses of the RAS, KIT, FLT3, or JAK2 genes revealed a high mutation rate of 86% with highest frequencies in NRAS, followed by KIT and FLT3-TKD mutations; in particular, 10/28 KIT mutations affected exon 17. In analogy, for the t(8;21) patients 58% exhibited gene mutations with highest frequencies KIT mutations followed by NRAS and FLT3-ITD; 10/16 KIT mutations affected exon 17. In univariate analysis, patients with FLT3-TKD showed a significant inferior RFS in the inv(16) cohort. Among t(8;21) patients, FLT3-ITD and KIT were associated with an unfavourable prognosis. Whereas for the other gene mutations there was no significant difference when comparing mutated and unmutated patients. Due to FLT3 and KIT mutations represent excellent targets for a therapy with tyrosine kinase inhibitors&#61472;, we performed an explorative analysis for the combined FLT3 and/or KIT exon 17 mutation status. In inv(16) patients, we could observed patients having either FLT3-TKD or KIT exon 17 or both mutations had a significantly inferior RFS compared to unmutated patients. However, there was no difference in OS. An explorative analysis combined FLT3-ITD and/or KIT exon17 mutations was performed in t(8;21) patients. It revealed a significant adverse OS and a trend adverse RFS. In summary, the high frequency of RAS, KIT, FLT3 or JAK2 gene mutations in CBF leukemia further sustain the model of different cooperating groups of gene mutations. FLT3 and KIT exon 17 mutations seem to be of prognostic relevance. Information on the KIT and FLT3 mutation status might reach clinical importance for identifying patients with molecular targeted therapies.