Reactions of cationic gold clusters in a radio-frequency ion trap under multi-collision conditions: coadsorption phenomena and activation of molecular oxygen and methane 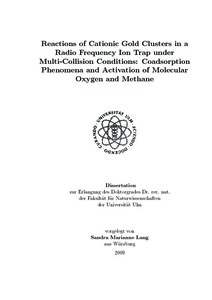 The aim of the present work was to determine reactivity patterns and general concepts that are important to the analysis of the catalytic C3H6 and CH4 oxidation reactions on gold particles by experimentally investigating small mass selected gold cluster cations in the gas-phase. First, the temperature dependent reactivity of Aux+ (x = 2 - 7) toward several small molecules (O2, H2, N2, CH4, and C3H6) were studied separately. While the Aux+ are completely unreactive toward O2, Aux+ show a distinct temperature dependent reactivity toward H2, N2, C3H6, and CH4. Furthermore, Au2+ is the only investigated cluster size that exhibits reaction products that directly prove the activation and dehydrogenation of CH4. The conflicting results of the facile adsorption of the hydrocarbons and the lack of adsorption of O2 seemed to preclude the potential successful partial oxidation of hydrocarbons on cationic gold clusters. The strategy pursued in the present investigations to nevertheless initiate the adsorption of O2 was to take advantage of coadsorption effects. In this context, the first comprehensive study on coadsorption effects on gold cations was performed. In these studies the cooperative coadsorption and activation of molecular oxygen on even size hydrogenated gold clusters were observed. With the help of molecular dynamics simulations, performed by U. Landman and coworkers, it was even possible to determine a reaction path of this cluster size selective reaction. On the basis of these experiments, Au2+ and Au4+ were identified as suitable model systems for the very first gas-phase experiments performed in the presence of a mixture of three reactants, namely H2, O2, and CH4. Most interestingly, both cluster sizes are able to coadsorb all three reactants. Due to the ability of Au2+ to activate CH4 differences in the reaction mechanisms of Au2+ and Au4+ were revealed and potential partial oxidation products were identified.