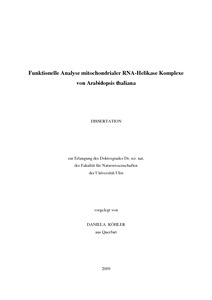 The subject of this thesis was to determine the functions of the two highly similar DEAD-box proteins PMH1 and PMH2 (76 % identical amino acids) in the mitochondrial RNA metabolism of A. thaliana. The investigation of T-DNA insertion mutants revealed that PMH2 is expressed stronger than PMH1. Both proteins seem to be part of high molecular mass complexes. It was found that the PMH proteins can be dissociated from the complexes by treatment of the mitochondrial lysates with potassium chloride. Under the same conditions ribosomes or polysomes remain unaffected. This observation and the different distribution of the PMH proteins and the ribosomal RNAs throughout the fractions of a sucrose gradient led to the conclusion that an integration or stable association of the proteins with ribosomes or polysomes is unlikely, although a weak or transient interaction cannot be excluded. Up to now the composition of these high molecular mass complexes remains unclear. The phenotypic analysis of the T-DNA insertion mutants showed that PMH1 is not an essential protein and has only a weak influence on the development of the plants. The function of this protein in the mitochondrial RNA metabolism is still unknown. No developmental or any other macroscopic phenotype was observed for the pmh2 mutants. It was thus concluded that PMH2 has no important function in development or the morphology of the plants. In the PMH2 mutant the steady state levels of the nad2-, nad4-, nad7- and nad9-mRNAs, but not the atp8-mRNA were reduced suggesting that PMH2 participates in the maturation of some but not all mitochondrial mRNAs. Further investigations showed that the splicing of some of the mitochondrial cis-splicing introns was reduced in the pmh2 mutant. In the mutant none of the posttranscriptional processes is completely blocked supporting a role of as a chaperone in the formation or maintenance of reactive secondary RNA structures.